skip to main | skip to sidebar

Walking Back in Time 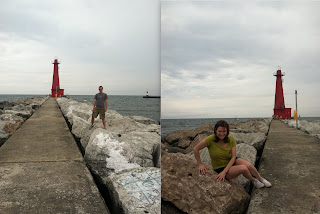 B and I went on vacation to visit his family in Michigan. At one point we walked out on a pier to see a lighthouse. Apparently, that walk took us back to our childhood selves.

I am the oldest of 3 girls and our mother's motto was safety first. She didn't want anything horrible to happen to us, and we really took to heart when she told us all the bad things that could happen if we weren't careful. To this day I have not been bitten by a rabid squirrel; thanks mom. So, I approached the pier Jon G style, marching dead center, clutching my purse, looking down to avoid tripping on cracks in the concrete, and making mental notes on how to operate the life preserver poles.

B, as the oldest of 4 boys, was raised by a mother who was clearly outnumbered. When they were younger they would try to climb the whole length of rocks without touching the pier. Oh hell no. I tried to explain to him how he would slip and fall and crack his head open. His lifeless body would float out to sea, as he would be unable to catch the life preserver I would throw. He was content to just stand on them and get his picture taken. My palms were sweating the whole time.

He then spent the next few yards trying to convince me to get my pic on the rocks. I finally agreed; I get all wild and crazy on vacation. I was very fortunate not to die. You never know when the Earth will tilt and the laws of physics will no longer apply.
Posted by Vanilla Bean Counter at 8/14/2011 08:44:00 PM

I thought that the earth shifted and the laws of physics had changed once. But it ended up that I was just really drunk. I broke my toe that night.

Vanilla Bean Counter
Peoria, IL
I'm an accountant living a mostly gluten free life in a sort of solidarity with my Celiacy mom, occasionally throwing in my two cents on local issues. Live in this town long enough and you too will learn to love Peoria's favorite past time of beating a dead horse.